What is Bid Shading and How it Saves You Money Bid shading is a crucial cost-saving feature that protects buyers from overpaying for inventory in first-price auctions by closing the gap between what a buyer’s willing to pay and what they should pay for any given impression.

It is done by algorithmically reducing a buyer’s submitted bid, which results in savings for every auction won where bid shading is enabled.

Why is bid shading important?

The short answer is: in the world of first-price auctions, if you’re not using bid shading, you’re wasting spend. Our clients put it best—Thomas Brambor, Lead of Programmatic Advertising at Known, states,

“We were able to save, on average, 43% on the media cost of our banner campaigns. Every single client we included in testing benefited from the changes.”

In a second-price world, it made sense for buyers to bid the true value of what they felt an impression was worth, because if they won, they’d only pay a penny above the next highest bid. So if a buyer bid at a $10 CPM for a video impression and the next highest bid was only $2, the buyer only paid $2.01. However, in a world of first-price auctions, that buyer pays the full $10 when they could’ve gotten away with paying, well, $2.01.

The above scenario is commonly known as the “winner’s curse,” a situation where auction winners pay far more for a given auction item than what it’s worth. Bid shading mitigates that effect.

How does bid shading work?

At the most basic level, bid shading algorithms analyze past clearing prices of a placement, compare it to what a buyer is willing to pay, and make their best guess at the lowest price a buyer could submit to win the auction. That said, there’s a lot that could go into bid shading algorithms—e.g., ad size, site, placement on page, etc.—and every company does it a little differently. For example, at Beeswax, we made a point to aim to achieve the results of lowered CPMs without optimizing toward cheaper, lower quality inventory.

However, it’s worth noting that since the entire point of bid shading is “bid lower to save money,” the end result is users of bid shading will win fewer auctions than they would have if it wasn’t in use.

Why is bid shading better with Beeswax?

Bid shading is better with Beeswax because no one else currently provides the same level of control and transparency with regard to how their algorithm functions. One-size-fits-all algorithms don’t work for targeting, and they don’t work for bid shading either.

Bid shading saves buyers money at the cost of lowered win-rates. That might be fine for an evergreen campaign where you have plenty of time to hit KPIs, but if you’re executing on a high-value branding and/or short-flight, promotional campaign, it’s more important to prioritize delivery over savings. We introduced Bid Shading Controls to do exactly that.

Bid Shading Controls enable Beeswax customers to set our standard bid shading algorithm to operate more or less aggressively at the click of a button. 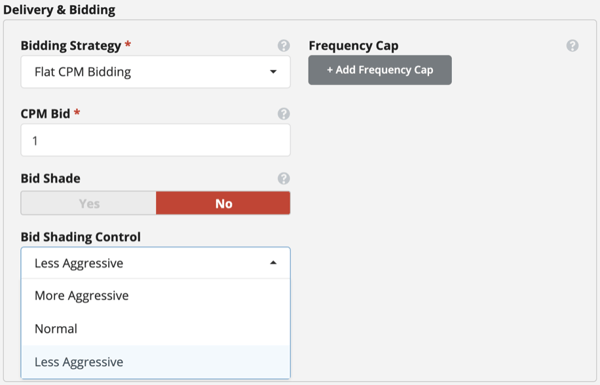 When set to “More Aggressive” the algorithm prioritizes reducing CPMs over maintaining win rates, and vice versa for “Less Aggressive.” As such, there’s a much higher degree of flexibility depending on your goals. To quote Brian Malone, Chief Data Science Officer at Nexstar:

“We’re thrilled with the savings we get from Beeswax’s new Bid Shading feature. We especially like the added transparency and control we get by being able to dial in the right tradeoff between win rate and cost savings. It’s control we don’t see with other platforms.”

To learn more about Bid Shading with Beeswax, tune into our upcoming webinar,